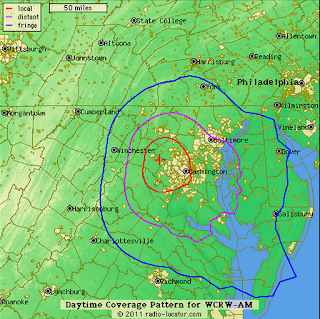 The evening 13th of November last year was one the most interesting this season with daytimer signals on at least 5 channels here in Möklinta. On 1190kHz were WLIB weaker than usual  and instead I heard  a close-down procedure  "...the studios of New Broadcasting Network in North America... Washington... Falls Church....WCRW Leesburg -Washington..."  followed the national anthem.  A nice surprise and it became the second  daytimer station I´ve heard on the QRG last season.
The station is a pure daytimer with power of 50kW, serving the Washington area with China Radio Int programs. Not heard in Sweden before, but both our Finnish and Norweigan colleagues have catched them last season.
Leesburg is a historic town situated in Loudoun county,VA  along the Catoctin Mountain and adjacent  to the Potomac River.