The reception of this station is a typical Grayzone-DX enhancement. It was heard August 27th during the last minutes before the station changed to its  night time antenna pattern,  when they have  almost no signal towards Scandinavia. The daytime antenna pattern has a better coverage towards northeast but with 2 kW lower power.
The signal was very weak but with a distinct ID as " 12-50 WMTR Morristown"  I sent the recording to Program Director Chris Edwards who verified my reception today.A nice opening of the new season!


this station is like a lighthouse in the AM band, always there when its open towards the northwesten hemisphere. I noted the station some days ago with a new type of  local ID, "CBC Radio One 1400 AM in Gander".  I sent Maureen Anonsen a reception report which was verified swiftly.
Gander is located on the northeastern part of the Island of Newfoundland and has a population of aprox. 10000 habitants. Gander was actually first an military airport that was built during the second world war where a town  started to  develop around.  The airport  later became Gander International Airport. It was used as a refuelling stop for atlantic flights in many years  until the newer long-range aircrafts hit the market. 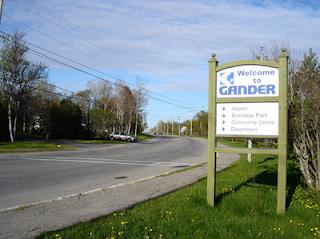