The 1st of June-10 I had the first better e-skip conditions last season. From Turkey to France from mid-day to the evening. At 1452 I had a station with soul and jazz music in and out on 88,7MHz with french. After a few minutes  I caught a short ID from one of the two Jazz R transmitters on the island of Corse. There is one in Bastia beaming its signal south and the other in Ghisoni in the middle of the island beaming its power north-northwest, which was probably the one that I heard.
A nice letter  and verification  came today from Cédric Badet, the engineer of the station who also enclosed cov-maps and a picture of the station 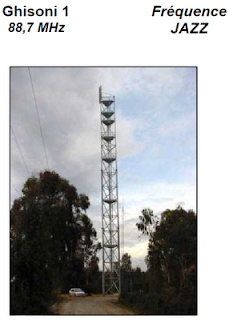