This station is a very rare guest on the frequency, you have to get past the 5-6 of the most common first to hear them.
The 24th of October -11 was probably one of the best mornings for the season with many unusual signals popping up in the band from the east coast US. At 7 o´clock they was on top with"The Capital Region´s sport station WOFX Troy, WGY HD2 Albany - Fox Sports 9-80, an Iheart radio station"
Paul Ihandler, Program Dir.  confirmed my reception today and writes : "We get a number of reports from your part of the world - and I can say yours is certainly one of the most distant DXs in quite a while!"
Troy is known as the Collar City due to its history of shirt,collar and other textile production. Located upstate N.Y. just north of Albany, on the eastern bank of Hudson River.The town was actually named after a vote of the people back in 1791.
It is also a well known fact that the "Uncle Sam"  name came right from here. It goes  all the way back  to the war of 1812 when troops were receiving barrels of meat with a big US stamp on them. Those barrels were coming from Troy meat packer Sam Wilson.
The troops quickly began using the nickname "Uncle Sam" when they talked about who they were getting the food from, because of the stamp. 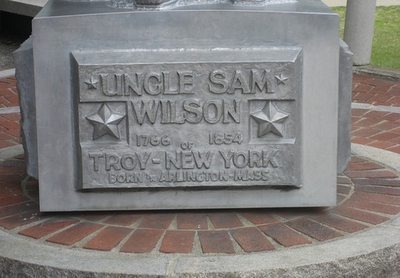