This is one of my favourite frequencys, often bubbling of signals.  The 16th of december was a date when conditions favoured the midwest and I noticed the classic country music when scanning thru the band. Between the songs  IDs and jingles with a patriotic appearance as "Proud to be an American - we´re 12-90 WIRL"
Peoria with a population of  115 000  has become famous as a representation of the average American city because of its demographics and its perceived mainstream midwestern culture. The question "Will it play in Peoria" has become a metaphor for whether something appeals to the american mainstream public. The saying was popularized by movies with Groucho Marx  which I suppose many have seen in the past.
Wayne R Miller, CE and also radioamateur, W9MI, confirmed my report with a nice pdf QSL letter, many thanks for that Wayne! 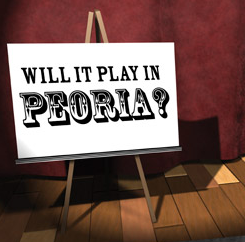