The station been on my "wishing list" for some time  but I never caught its signals until the 27th of December when they came in with great strengh the last minutes of the daytime power and antenna pattern.
The station is easy to recognize with its Tejano music and ID´s as "Radio Unida 9-20AM". Licensed and located in Quantico,VA, on the bank of Pontomac river but the station serves the metropolitan area of Washington.
V/s Al Hammond  welcomed me to the exclusive club of distance listeners among Norweigans, Finnish and Artic Circle visitors..!
Quantico has a population of only 600, but is the site of one of the largest U.S. Marine Corps bases in the world. You also find the Drug Enforcement Admin. training academy, the FBI Academy, FBI Laboratory and the Naval criminal Investigative Service on the base. The famous  Marinecorps Memorial monument can be found at the entrance of the base. 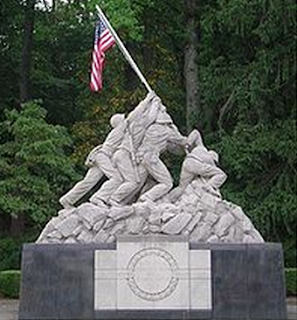