One of the more surprising catches of the 2010 season was  WPLN on 1430. The station probably had some problems with the switch to nightpower/ antenna pattern and kept the daytime 15kW nondirectional running all night. It was the 22nd of October that I heard   "This is Nashville´s Public Radio 14-30 WPLN AM...wpln.org"  and a few other DX-fellows too,  here in Sweden.
Today I got a nice verification at last from Carl Pedersen:


Mr. Holmberg,
I am responding to your note to Donna regard reception of WPLN 1430AM on Oct 22nd 2010.   I listened to the mp3 and heard the station ID clearly.
Please consider this note as official verification of your reception of WPLN-AM in Nashville, TN.
Regards,
Carl Pedersen
Technology Director
Nashville Public Radio
WPLN FM
WPLN AM
The station located in Madison,  a northeastern neighborhood in Nashville,  serving Nashville with Public Radio. As seen on the coverage map the signals reached a little bit further that night than normal... 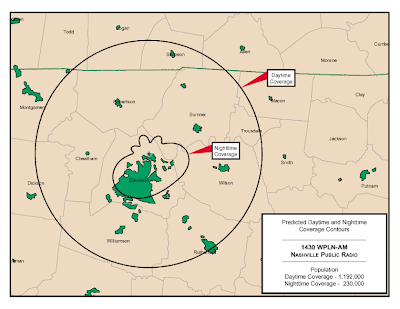